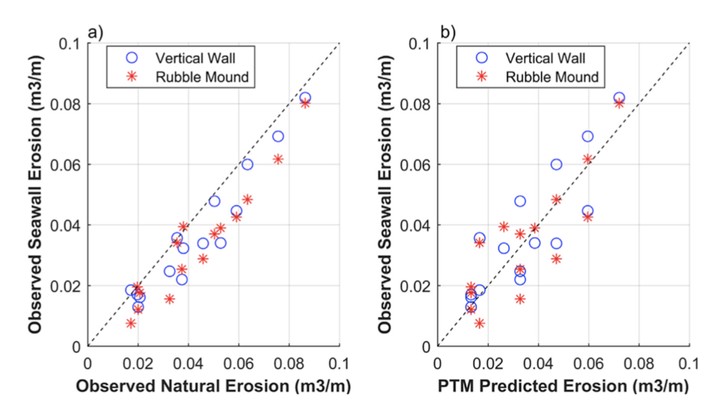 Persistent and accelerating sea level rise (SLR) may have a significant impact on the evolution of sandy coastlines this Century. The response of natural sandy beaches to SLR has been much discussed in the literature, however there is a lack of knowledge about the impact of SLR on engineered coasts. Laboratory experiments comprising over 320 h of testing were conducted in a 44 m (L) x 1.2 m (W) x 1.6 m (D) wave flume to investigate the in- fluence of coastal armouring in the form of seawalls on coastal response to SLR. The study was designed to investigate the effects of contrasting types of seawalls (reflective-impermeable versus dissipative-permeable) on beach profile response to increased water levels, in the presence of both erosive and accretionary wave conditions. The results obtained showed that seawalls alter the evolution of the equilibrium profile with rising water level, causing increased lowering of the profile adjacent to the structure. Under erosive wave conditions, modelled profiles both with and without seawall structures in place were observed to translate landward in response to SLR and erode the upper profile. It was found that the erosion demand at the upper beach due to a rise in water level remains similar whether a structure is present or not, but that a seawall concentrates the erosion in the area adjacent to the seawall, resulting in enhanced and localised profile lowering. The type of structure present (dissipative-permeable versus reflective-impermeable) was not observed to have a significant influence on this response. Under accretive conditions, the preservation of a large shoreface and berm resulted in no wave-structure interaction occurring, with the result that the presence of a seawall had no impact on profile evolution. A potential two-step method for estimating the observed profile response to water level rise in the presence of seawalls is proposed, whereby a simple profile translation model is used to provide a first estimate of the erosion demand, and then this eroded volume is redistributed in front of the seawall out to the position of the offshore bar.